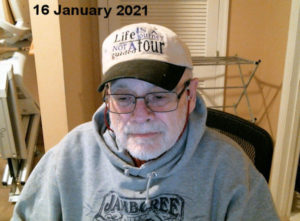 It was a dark and stormy night many years ago…and a small boy gazed in wonderment at the eerie glow of the burning slag dumps along the banks of the heavily polluted Monongahela River as it flowed Northward towards its terminus at the then “Steel Capital of the World.” As he pondered the future, little did he realize that he would eventually become a small cog in the machinery of onrushing technology….

I worked on the electronics for the Ranger Lunar Probes, which were the first systems to actually take closeup pictures of the moon. The Ranger was designed for a “one-way trip.” It took pictures on the way in, transmitted them back to Earth and then crashed into the Moon. So, some of the electronic assemblies I worked on for Ranger are probably littering the Moonscape. One other project of note that I worked on was an early prototype of the hand-held video camera that the astronauts used on their first trip to the Moon in 1969.

I was a Field Engineer maintaining hardware and operating system software for a Philco-Ford 2000 Computer, a machine developed in the early 1960’s. The Philco-Ford 2000 was a “mainframe” computer with a 48-bit word length and a whopping 64K of “very fast” magnetic core memory (1.5 microseconds). The 64K of memory took up as much floor space as about 12 of today’s standard 19-inch center electronics cabinets. And, of course, as was the norm back then, there were lots of tape drives.

Worked in a group that developed network simulation and modeling software using Assembly Language, FORTRAN and COBOL. Initially, the software ran on a Philco-Ford 2000 Computer. We eventually ported the software to an IBM 360/50 and were all quite taken aback when we discovered that the IBM 360/50 was quite a bit slower than the old Philco-Ford 2000. Although the IBM 360 Series computers were “32-bit” machines, the mid-range computers such as the IBM 360/50 had 16-bit data paths. But things got better when we started running on an IBM 360/65, and eventually on an IBM 370.

During the mid-1970’s, I worked on a project called AUTODIN II, which was supposed to be the replacement for the venerable AUTODIN network. This was my first exposure to the “minicomputer” world. We developed real-time executives, communications device drivers and protocol software on DEC PDP-11 computers. Another first was my exposure to a couple of “new” network protocols called the Transmission Control Protocol (TCP) and the Internet Protocol (IP). We used assembly language and “Structured FORTRAN,” a pre-compiler that used structured constructs that in turn produced FORTRAN code. For a number of reasons, AUTODIN II never went operational.

My next major network engineering job introduced me to yet another protocol called “X.25” and its supporting cast…X.3, X.21, X.28, X.29, and X.121. And this was also my first exposure to the “Open Systems Interconnection (OSI) Model.”

During this time, I was also introduced to what I consider one of the three most significant information technology events of the last half of the 20th century…Personal Computers (PCs). My first PC was a Kaypro II, with a Zilog Z80 8-bit CPU, 64K of memory, two floppy drives and an operating system called CP/M . The Kaypro II was retired and replaced by an IBM PC, which in turn was replaced by an IBM PC/AT…and the rest is well-documented history.

Subsequent to this, I worked on a number of projects that I can’t tell you all too much about. But, as you can guess, they all involved some aspect of data communications and networking. 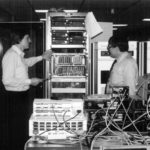 In 1985, I became the Director of Network Engineering in an organization responsible for the design, deployment and ongoing operations and maintenance of the US Treasury Department Consolidated Data Network (CDN). For the next 3.5 years or so, I worked on the CDN. During this time, we deployed the CDN throughout the 50 states, and locations in Puerto Rico, the Bahamas, Bermuda, and Canada.

When I left CDN, every US Customs Service (USCS) location (headquarters, regional and district offices, ports of entry, border crossings, international airports), and the majority of the Internal Revenue Service (IRS) headquarters, tax processing service centers, regional offices, district offices and posts of duty were using the CDN as their “data transport utility”…and we were operating and maintaining CDN from a Network Control Center (NCC) 24 hours a day, 365 days a year.

CDN went on to become an even larger network serving additional US Treasury agencies including the Bureau of Alcohol, Tobacco and Firearms (BATF), and the U.S. Mint. I guess you could call CDN a real success story!

During this time, I was introduced to what I consider the second significant information technology event of the last half of the 20th Century…Local Area Networks (LANs). We were looking for a cost-effective way to build an computing infrastructure to support the CDN project.

We stumbled upon a small company in Utah called Novell that sold a product called Netware. The end result was the implementation of a LAN at the CDN NCC using Netware servers and Token Ring transmission technology.

Why Token Ring you ask? Well, we did consider Ethernet but decided that Token Ring was more stable and maintainable (i.e., at the time, Token Ring used shielded twisted pair while Ethernet used coaxial cable). The Token Ring was eventually replaced by Ethernet 10BaseT (twisted-pair!).

After I left CDN, I was involved in a number of other smaller network engineering projects. I also worked for a while providing network systems engineering support for new business activities. And got introduced to the third significant information technology event of the last half of the 20th century…the Internet and its great enabler…the World Wide Web.

Turn of the Century…

From April 1997 through 1999, I was a member of the Corporate Year 2000 Assurance Office for a Fortune 500 IT company. Our charter was to insure that the corporation met its Year 2000 obligations in a timely and professional manner. This included providing guidance to and oversight of the various business unit Year 2000 projects that made their products, internal applications and infrastructure “Year 2000 Ready.”

From early 2000 until April 2003, I was a network systems engineer/project manager in a group that did “outsourcing” for various clients.

I was semi-retired for a few years doing independent consulting…mostly for network engineering and design, but also IT in general. I also did a few web site design jobs, although I’m far from an expert at it.  I’m fully retired now and enjoying every minute of it.

I was born in the Monongahela Hospital, which at the time was located in the borough of New Eagle, PA. My father worked at the time as a molder in a Cast Iron Foundry in Monessen, PA. My mother was, as most were at that time, a “Stay-at-Home” Mom. I’m the oldest of three brothers.

I lived in Monessen for most of my childhood and teenage years. Monessen is located along the Monongahela River and, like Essen, Germany, its primary industry was steel-making.

I graduated from Monessen High School and shortly thereafter, enlisted in the United States Air Force (USAF). Back in those days your options were to enlist or wait to get drafted! So I figured I might as get my military service obligation over with as soon as I could and then get on with my life.

I went through basic training at Lackland AFB in San Antonio, Texas. Upon completion of basic training, I spent about six months at Gunter AFB in Montgomery, Alabama. I was then transferred to Otis AFB on Cape Cod in Massachusetts, where I spent the remainder of my four years in the USAF, working as a clerk in the 551st USAF Hospital headquarters. When I was discharged, I was an Airman First Class (three stripes). I think that is equivalent to today’s Senior Airman rank.

Upon completion of my military service, I headed back home to Charleroi, PA, as my parents had moved from Monessen to Charleroi while I was gone. Charleroi’s basic industry was glass-making. It was named after Charleroi, Belgium, which is one of the leading glass-making centers in Europe. A number of Charleroi’s original inhabitants were Belgians who had emigrated to the United States to work in the glass factory and coal mines.

Having been discharged from the USAF and unable to find a decent job, I decided to go back to school. I earned the equivalent of an Associate’s Degree in Electronic Technology from a school called Electronic Institutes in Pittsburgh, PA. And I got married. We were then off to a place called Hightsown, NJ as I got a job with an aerospace company in their satellite manufacturing plant.

The Years Go By…

We lived in Hightstown for a year or so. I took a new job as a field engineer with a computer manufacturer and eventually ended up in Arlington, VA. About five years later, I got a new job as a network engineer with an IT company and we moved to Vienna, VA. We raised two kids (girl and boy) and I got a bit more educated along the way. I received a Bachelor’s Degree in MIS from George Mason University and did a bit of graduate work in Computer Science at Virginia Tech.

I stayed with the IT company a lot longer than I ever thought I would. But over the years, the company and technology changed so much that it really seemed like I worked for a number of different companies over the years.

I’m still retired and now live in Leesburg, VA with my daughter, son-in-law, two grandsons, two Pugs, a mixed Terrier/Whatever and initially, a real Jack Russell, a Pug and a demented one-eyed Maltese, all of whom have gone on to the big doghouse in the sky.  After 17 years of faithful service, the ancient pickup truck was replaced by a shiny new SUV.  And I still spend more time than I should writing stuff like this and fooling around with open source software.

My loving wife passed away on 16 June 2020 after a long and debilitating illness.  I’m on my own for now but we’ll be together again someday.

Guess if nothing else, I can say: “Been there, done that” as the answer to a lot questions…and am “still doing that.”

And that’s my story and I’m sticking to it!

The initial version of this page was created on Wednesday, 24 December 1997
The most recent update to this page occurred on Sunday, 21 April 2021

A list of the pages contained on this site.  The list sort order default is latest to earliest publication date.