Note: These files were downloaded long ago from various Internet sites, some of which are long gone at this time. As far as we know, none had any licensing or other usage restrictions at the time they were downloaded. However, if there are files in this collection that do indeed have usage restrictions, please contact us and we will remove them. And, of course, credit is given to all who produced these files.

More MIDI files from back in the Web 1.0 era. To hear the MIDIs, Press a play button () and be patient. It takes a few seconds to get the MIDI Player’s attention.

Giving back to the community… 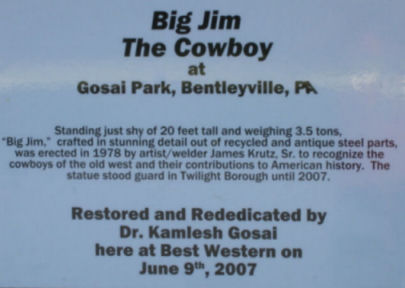 There’s a small town named Bentleyville off of Exit 32 of Interstate 70 in southwestern Pennsylvania.  Until recently, Bentleyville was known mainly as the home of a busy Truck Stop and a Best Western Hotel, both of which are quite visible to travelers along Interstate 70.  On the 9th of June, 2007, Bentleyville acquired another landmark.  His name is Big Jim the Cowboy and this is his story.

Big Jim lived for many years at the Krutz Welding Company on Twilight Hollow Road, which is a few miles east of Bentleyville.  Krutz Welding was no longer in business and the property had been sold, so Big Jim had to find a new home.  He put himself up for sale on eBay, but the reserve was not met.  Other attempts to find a new home for Big Jim were also unsuccessful and he was in danger of joining the ranks of the homeless.  But, at the last moment, a kind benefactor stepped into the breech and offered Big Jim a new home.  And, in addition, on the day Big Jim moved into his new home, invited all the townsfolk over for a free barbecue, musical entertainment, a petting zoo and pony rides for the kids, an antique auto show, and more. 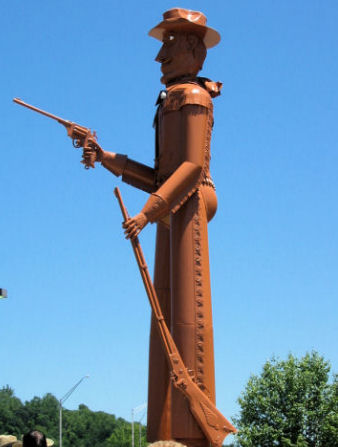 The benefactor was Dr. Kamlish Gosai, a prominent local physician, who also happened to be the owner of the Bentleyville Best Western Hotel.  Big Jim now stands guard 24×7 at the hotel, with his trusty six-shooter pointed westward.  And is visible to all traveling that stretch of Interstate 70.

Big Jim is quite happy with his new home, a new coat of paint, a fancy pedestal to stand on, with a plaque that summarizes his history and vital statistics.  If you ever happen to be in the area, be sure to stop in Bentleyville and say hello to Big Jim the Cowboy.  And if you happen to meet up with him, thank Dr. Gosai for rescuing Big Jim and giving him a new home his community can be proud of. 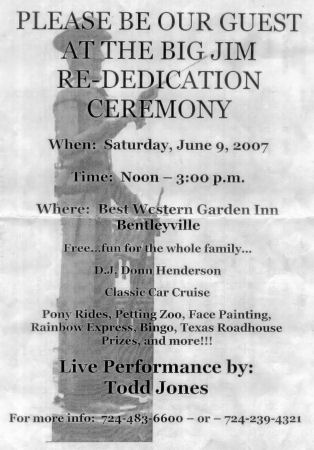 You can learn more about Big Jim by searching Google for “Krutz Welding Big Jim.”  And, take a look here to view more pictures of Big Jim, some of which show the amazingly detailed work done by the artist/welder James Krutz, Sr.

Does the statement, “We’ve always done it like that” ring any bells?

The US standard railroad gauge (distance between the rails) is 4 feet, 8.5 inches.

That’s an exceedingly odd number.  Why was that gauge used?

Because that’s the way they built them in England, and English expatriates built the US Railroads.

Because the first rail lines were built by the same people who built the pre-railroad tramways, and that’s the gauge they used.

Why did “they” use that gauge then?

Because the people who built the tramways used the same jigs and tools that they used for building wagons, which used that wheel spacing.

Okay! Why did the wagons have that particular odd wheel spacing?

Well, if they tried to use any other spacing, the wagon wheels would break on some of the old, long distance roads in England, because that’s the spacing of the wheel ruts.

So who built those old rutted roads?

Imperial Rome built the first long distance roads in Europe (and England) for their legions. The roads have been used ever since.

And the ruts in the roads?

Roman war chariots formed the initial ruts, which everyone else had to match for fear of destroying their wagon wheels.

Since the chariots were made for Imperial Rome, they were all alike in the matter of wheel spacing.

The United States standard railroad gauge of 4 feet, 8.5 inches is derived from the original specifications for an Imperial Roman war chariot.

So the next time you are handed a specification and wonder what horse’s ass came up with it, you may be exactly right because the Imperial Roman army chariots were made just wide enough to accommodate the back ends of two war horses.

Now, the twist to the story…

When you see a Space Shuttle sitting on its launch pad, there are two big booster rockets attached to the sides of the main fuel tank. These are solid rocket boosters, or SRBs.

The SRBs are made by Thiokol at their factory at Utah. The engineers who designed the SRBs would have preferred to make them a bit fatter, but the SRBs had to be shipped by train from the factory to the launch site.

The railroad line from the factory happens to run through a tunnel in the mountains.

The SRBs had to fit through that tunnel.

So, a major Space Shuttle design feature of what is arguably the world’s most advanced transportation system was determined over two thousand years ago by the width of a horse’s ass.

And you thought being a HORSE’S ASS wasn’t important!