Hrpr.com’s contributions to the SETI(at)Home project over the years exceeds 13,400,000 BOINC Cobblestones.

Servers here on hrpr.com’s intranet have been contributing spare CPU cycles to the SETI@Home Project since March 2003.  Since then one or more servers have been faithfully processing signal analysis tasks 24 x 7.  However, as of 31 March 2020, SETI@Home has gone into “hibernation” and will no longer be sending tasks to the SETI@Home community.  If they wake up and start sending tasks once more, maybe one of these days in the future we will be assigned a task that decodes to “ET Phone Home.

We’ve contributed Quintillions of Floating Point Operations to the SETI@Home Project over the years: 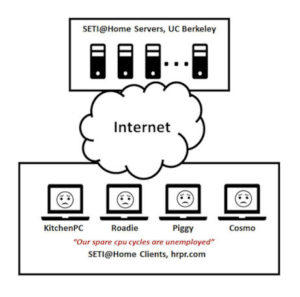 A history of computers that have contributed CPU cycles over the years we have participated in SETI@Home: